The definition of Nutrient is as follows: “A substance that provides nourishment essential for growth and the maintenance of life.” 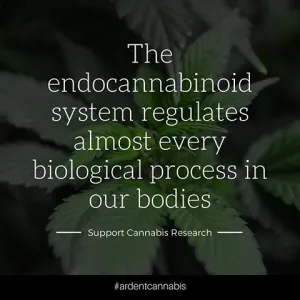 In fact, much dietary focused research would suggest Phyto-Cannabinoids are VITAL NUTRIENTS as they support a primary bodily system which aids in regulating every other system within the body. So why do we continue to allow the conversation to include the term DRUG when discussing Cannabinoids?

As stated in the image our body would not produce it if it wasn’t necessary for proper function and our body isn’t a drug factory. THC is but a very small component in the Cannabinoid world even though it is the focus of the current marketplace and conversation.

Nature has always provided natural options to sustain health and function. It has been humans who have manipulated that remedy and distorted the balance to achieve euphoric levels of feeling. Nature provided the Cannabis plant with a balance much more aligned with nutritious value. Having a high CBD content with lower THC content. Through genetic manipulation we have flipped that ratio on its head and taken the natural balance out of order to provide more Euphoric results. We abandoned the nutritious value for the high and have created an epidemic of generations with endocannabinoid deficiency.

It is no shock seeing a rise in hormonal imbalances, neurological disorders, fertility issues, and so on when we take a logical approach to the timeline of Cannabis use and what has transpired. Prior to 1937, Cannabis was the 3rd most prescribed drug in the United States. It was used in most tinctures as an oil base thus providing levels of Cannabinoids to people. By demonizing this Vital Nutrient and adding it to the schedule 1 drug list we have taken away the fuel which helps aid us in balancing so many different functions within the body.

Our bodies produce Endogenous Cannabinoids which help to regulate the many systems within our body. These Endogenous Cannabinoids are mimicked in plants. Many plants we have long associated with Super Foods or highly beneficial properties are now through research being directly linked to the Endocannabinoid System. One is dark chocolate. Compounds within the Cocoa mimic Anandamide (Bliss Molecule) which induces feelings of bliss. People found with depression have been linked to a deficiency of Anandamide. Beta-caryophyllene (BCP) has been linked to hops, avocado, and other plants is approved by the FDA and has shown great impact working with the Endocannabinoid System (ECS). We are still behind in the research of this complex and vital system, but we know enough to logically understand plants are sources of nutritious value in regard to the ECS.

As we seek to understand more about our bodies and how Cannabinoids can help improve our health. It is important to understand what they are doing. They are not a drug that is being introduced to alter bodily responses. They are a VITAL NUTRIENT which is necessary for the highest functioning of our bodily systems.